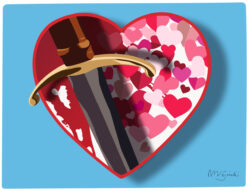 The modern-day image of Valentine’s Day is one of cute Cupids, fluffy kittens and glowing hearts. However, the origins of the story couldn’t be more different! Read how, with some clever marketing and great design work, Valentine’s Day was turned from a gore-fest to a love-fest.

How Valentine’s Day was graphically redesigned

The image of Christians being tortured and executed isn’t usually one associated with declarations of romantic undying love. However, over the years, Valentine’s Day has become one of the most popular (and profitable) days of the year for the retail industry.

The Christian values of love and forgiveness are ones that resonate through the ages.

The image of Cupid (the Roman God of Love) was legal under the Roman Empire and Christian clergymen routinely wore purple amethyst rings with the image of Cupid as a recognisable symbol of love. The ‘heart’ shape became popular during the Victorian period.

When Valentines were handmade and hand-delivered in the early 1800’s, the look and feel was very important, hence luxurious materials such as silk and lace were utilised. Valentines cards began to be posted, the suggestion of luxury became even more important, hence the accompaniment of gifts such as chocolate and flowers.

A primary colour (red) against a plain background stands out and is instantly identifiable as a Valentine’s card and the addition of gilt writing further complements the look and enhances the luxurious experience.

Valentine’s Day taps into both of these core tenets of marketing – FOMO (Fear of Missing Out) and YOLO (You Only Live Once).

So, is it time to fall in love with your business again?

See how a graphic designer with marketing brain allied to top-notch presentation skills can both simplify and enhance your business proposition.

Get in touch with us today and let’s start a conversation about how we can be a part of your marketing success.

Courtly love in the middle ages

It was here, in the European courts, that the image of St Valentine was first used for love purposes.

1382: The first recorded association of Valentine’s Day with romantic love is in ‘Parlement of Foules’ by Geoffrey Chaucer
1400: The earliest description of February 14 as an annual celebration of love appears in the Charter of the Court of Love issued by Charles VI of France.

1797:  A British publisher issued ‘The Young Man’s Valentine Writer’, which contained scores of suggested sentimental verses for the young lover unable to compose his own.
1840: The introduction of cheap postage (via The Penny Black) saw 400,000 Valentine’s Cards posted and marked the start of the anonymous sending of Valentine’s cards
1847: The concept was introduced to America by a shop in Massachusetts selling Valentines of embossed paper lace. It was so successful that, within 2 years, Saint Valentine’s Day had become “a national holiday”.
1868: Cadburys created Fancy Boxes in the UK – decorated boxes of chocolates – in the shape of a heart for Valentine’s Day.

And the rest, as they say…is history!